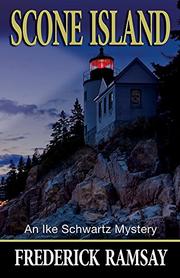 An eagerly awaited vacation on a quiet Maine island becomes a nightmare for a former CIA agent and his significant other.

Ike Schwartz is currently the sheriff of Picketsville, Va., where his longtime love, university president Ruth Dennis, is recovering from a nasty incident that put her in a coma. Both of them manifestly need some peace. So when Ruth inherits her aunt’s house on Scone Island, they sneak off for some R&R. Four miles off the Maine coast, Scone has no electricity, phone service or even reliable water. But it does have a recent death, the suspicious fall from a cliff of mystery man Harmon Staley. While Ike is looking into the death of Staley, who was once his colleague, another of his old pals from the CIA is desperately seeking him. Charlie Garland, cut out of a secret operation by his boss, has learned that someone is killing CIA agents who once had worked on several cases with Ike, and he's convinced that Ike is next on the list. After snooping around on Scone and a nearby uninhabited island once used by the Coast Guard, Ike thinks he’s found the motive for Staley’s murder. Now he and Ruth may have to fight a pitched battle against unknown enemies from his past to survive.

The latest mystery-thriller for Ike (Rogue, 2011, etc.) provides all the fast-paced action and danger readers have come to expect.