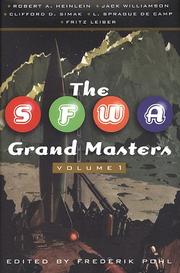 The Science Fiction and Fantasy Writers of America occasionally bestows Grand Master Awards to deserving, living authors for lifetime achievement. So far fifteen have been awarded; the first five recipients are showcased here, with two further volumes projected. The famous, not so famous, and neglected stories were judiciously selected by editor Pohl, and since he naturally knows/knew all the writers, he also provides informative introductions, biographical notes, and personal reminiscences. The first recipient, Robert A. Heinlein (1907—88) has five entries, two of them well-known stories about duty and honor, “The Roads Must Roll” and “The Long Watch.” Jack Williamson has four entries; “With Folded Hands” inaugurated his celebrated novel The Humanoids. Clifford D. Simak (1904—88), noted for his poignancy, folksy charm, and love of robots, weighs in with three tales, including “Desertion” and “Grotto of the Dancing Deer.” The brilliant Fritz Leiber (1910—92) has three obscure entries. And L. Sprague de Camp, known for his impish fantasy series The Incompleat Enchanter (with Fletcher Pratt), presents “A Gun for Dinosaur” and two others. Should induce today’s readers to investigate these splendid writers, and it’s a nostalgia trip for long-time fans.