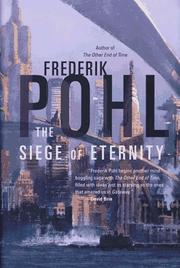 THE SIEGE OF ETERNITY

Sequel to The Other End of Time (1996), Pohl's new saga in which an unsuspecting Earth has become the object of a galactic war waged between the Beloved Leaders, or Scarecrows, and the Horch over who controls the ``eschaton,'' a time in the remote future when every being that has ever lived will rise again. Spook Dan Dannerman, astronomer Pat Adcock, and others were abducted from the orbiting Starlab, cloned, and subjected to horrid experiments by alien ``Dopeys'' and ``Docs,'' controlled by the Beloved Leaders. They manage to escape and return to Earth, where they find other copies of themselves with altered memories already in residence. The returnees have also captured a Dopey and two Docs who promise to help them understand Beloved Leader technology. Colonel Hilda Morrisey of the National Bureau of Investigation takes charge of the clones. Then the Docs break free of their Dopey's control and warn of imminent invasion by the Beloved Leaders, and maybe Horch too—until Hilda's assistant, a religious fanatic mole, attempts to blast Hilda, Dan, and the Docs. Pohl does a seamless job of reintroducing readers to the convolutions of his black-comic future tussle. However, while The Other End of Time was both self-contained and sequel-ready, this crowded, complex entry merely seems incomplete.