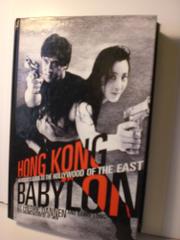 An Insider's Guide to the Hollywood of the East

Journalist Dannen (Hit Men, not reviewed) and Hong Kong film maven and collector Long take a look at one of the world's most vital cinemas, one that's facing an uncertain future under its new Chinese rulers. The Hong Kong cinema is one of the world's most prolific and energetic. Recently, two of its most majestic figures, actor-director Jackie Chan and director John Woo, have successfully made the transition to working in the West. Many others—actor Chow Yun-Fat, directors Ringo Lam and Tsui Hark—are following in their footsteps, filled with hope. Dannen went to Hong Kong for a New Yorker article to see how the industry was facing up to this summer's handover to China of the former British colony. The result was a typical New Yorker piece, which is also the first section of this book: exhaustively reported and handsomely written but somehow superficial, delivering rather less than promised and geared for a readership of tourist-voyeurs. The remainder of the book consists of very brief interviews by Dannen, with numerous directors, producers, and actors, accompanied by filmographies; capsule descriptions by Long of some 300 key Hong Kong films; and recommendations from a dozen critics. Dannen's essay touches briefly on a number of issues worth exploring in greater depth: onerous working conditions, low budgets, and shoddy production values; the huge market for Hong Kong films throughout Asia; the language problem (Mandarin versus Cantonese), which is only going to get worse now that the Mandarin-speaking mainlanders are in charge; the role of underworld figures whose presence permeates the film industry. Neither Dannen nor Long is able to convey the energy and inventiveness that make the best Hong Kong films so entertaining. Producer Peter Chan tells Dannen, ``We don't have a clue why you Americans like [our films] so much.'' This book won't tell you, either. (50 b&w photos)