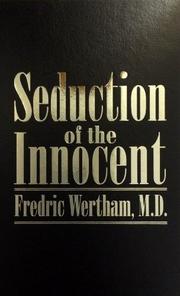 SEDUCTION OF THE INNOCENT

Part of this material may be familiar to some readers—from its appearance in magazine media and the subsequent argument it aroused—for, from intensive examination over many years, it provides an overwhelming onslaught against the comics.

And while the defense may contend that all these sins cannot be laid at this particular door—the evidence here which is based on substantial case histories certainly establishes the consangunuty between the comics and delinquency as they condition habits of hate, prejudice, violence, sexual provocation and perversion, and of course—illiteracy. From the various types of comics—to the advertising they contain—to the manufacturers—to their dispersal overseas—and to the failure of legislation here, this concludes with "homicide at home"—and the dangers of televiolence, which is probably an even stronger issue today since television has to some extent replaced the comics.

In any case, this is an alarmed and alarming record, which probably will not reach the level where it is most needed except through professionals, teachers, social workers, etc.