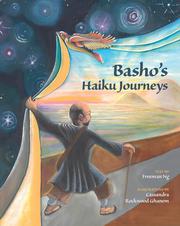 A glimpse into the life of a legendary poet.

A brief preface explains that the beloved Japanese poet Basho was born in 1644 in Edo, Japan. However, this particular title is focused on his “wayfaring, or traveling, life,” which occurred during the period from 1684 to 1689. The story is divided into five sections modeled after the five journeys Basho took, which later served as inspiration for some of his most recognized work. Via narration cast entirely in a series of haiku, readers are introduced to the poet when he is still a teacher. Faced with sudden change when his house burns down, Basho decides to be “forever afoot” in his quest to seek “the Way” and embarks on the path as a wanderer. The majority of his journeys consist of observations of fleeting moments in nature, such as the birth of a fawn, a “newborn spirit,” during his third journey. Later, in his fourth, he feels the dizzying heights of mountains. The whimsical haiku are paired with Rockwood Ghanem’s landscapes, rendered in bold colors that deftly blend together to invoke the feeling of misty mountains and grassy fields. As a sudden illness takes Basho on his fifth and final journey, the concluding lines from the poet himself ponder the natural course of life. While the narrative is skillfully done, readers may become more familiar with the art of haiku than with Basho’s life.

A greater exploration of the art form than the artist.