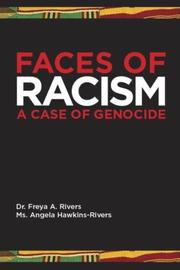 A sociological work confronts the many facets of American racism.

“If you are Black, you are at risk of genocide.” So claims Rivers (Swallowed Tears, 2012) early in this book, which examines the nature of American white-on-black racism from the founding to the modern day. She is not exaggerating for effect. Rivers argues that the institutional treatment of blacks in America fits the definition of genocide as outlined by the Convention on the Prevention and Punishment of the Crime of Genocide in 1948. According to Rivers, American racism has seven faces: Distortion, Omission, Stereotype, Inferiority, Superiority, Hatred, and Denial. The author explores each face in detail, from the distortion of science in order to dehumanize non-Europeans to the denial of white liberals who do not believe they are racist: “Whites are racist because racism is institutionalized in every facet of life in the United States. Most Whites are not intentionally racist, but the faces of racism, in many cases, have become unrecognizable.” Each chapter takes one of the faces as its subject, examining its origins and effects on people of color. Rivers provides an anecdote relating to the face, followed by ethical standards through which the face should be considered, proposed solutions for dealing with it, and questions and actions to inspire readers to address it in their own lives. For Superiority, for example, Rivers recommends the ethical standard of Balance; the proposed solution is a level economic playing field; a question readers should ask themselves is whether they know about various liberation movements across the globe; an action is to patronize black-owned banks and businesses.

A sexagenarian, Rivers brings a lifetime of activism and educational experience to the work, from participating in the desegregation of East Baton Rouge’s public schools in the 1960s to establishing an Afrocentric charter school in Lansing, Michigan, in the 1990s. Her frequent use of quotes and the extensive bibliographies attached to every chapter reveal her deep familiarity with literature and research on the effects of American racism. Her uncompromising posture and willingness to call out racism at every level are invigorating, and it feels particularly urgent now in an era of increasingly visible instances of white supremacy. Even so, there is an emphasis on rhetoric over substance that keeps the book (which features contributions from debut author Angela Hawkins-Rivers) from becoming as persuasive as it wants to be. There are many instances of emphatic capitalization and long, unlinked URLs that clutter the pages. Despite Rivers’ frequent citation of charts and studies, her language veers closer to the emotional than the scientific: “European doctrines of White supremacy are force fed into the brains of our babies.” Appendix B is simply an ad for Rivers’ academic consulting group, which further undermines the altruistic purpose of the book.

A bracing and timely, if somewhat one-note, appraisal of racism in America.

THE EVOLUTION OF RACISM
by Pat Shipman
Nonfiction