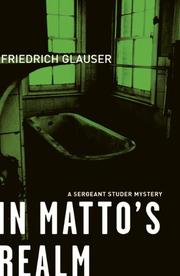 The first English translation of a widely respected crime novel originally published as a serial in 1936.

Swiss Detective Sergeant Jakob Studer, a has-been in the Bern police establishment, receives his latest assignment with mixed feelings. Though he’s happy to be doing anything of an investigative nature, he’s not so happy that he’ll be doing it at Randlingen, an insane asylum. But he’s dispatched there by his chief in response to a request from acting clinic director Dr. Ernst Laduner. Ulrich Borstli, Laduner’s boss, has suddenly disappeared, and an inmate is also missing. It doesn’t take long for the Randlingen community—pop. 800, including staff—to turn Studer’s preconceptions upside down. He finds sanity where he least expected it and a lack of emotional stability where it’s most needed. Laduner himself turns out to be charismatic and inscrutable, both a help and a hindrance to Studer’s investigation. Matto means crazy in Italian, Studer reflects, and as he tries to solve the mystery of the Randlingen murders, he wonders how well he knows himself. “We’re all of us murderers,” Dr. Luduner warns darkly.

Complex characters, a deft puzzle and an authoritative sense of place compensate for a pace slower than most modern readers are used to. It’s worth noting that Glauser, a diagnosed schizophrenic, wrote most of his novel while institutionalized.