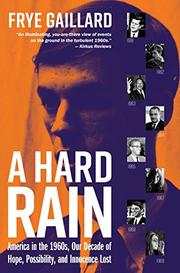 America in the 1960s, Our Decade of Hope, Possibility, and Innocence Lost

A smart, readable survey, at once personal and universal, of a decade that is still under debate today.

Southern historian and journalist Gaillard (Writer in Residence/Univ. of South Alabama; Journey to the Wilderness: War, Memory, and a Southern Family's Civil War Letters, 2015, etc.) graduated from college “in the terrible year of 1968,” and he hit the ground running. He had been paying attention to the trends that were bringing change to the remotest corners of the South, wrought by politics as well as popular culture. Taking a broadly synoptic view, the author focuses on small moments that yielded huge effects, beginning with a Woolworth’s lunch counter in Greensboro, North Carolina, where Franklin McCain and other college students politely but firmly refused to leave when ordered to do so: “They reveled in their moment of deliverance,” Gaillard writes, “but they knew already that this was something much bigger than themselves.” The battle against racial division quickly emerges as a major theme in Gaillard’s narrative, with mileposts such as Thurgood Marshall’s key role in Supreme Court decisions about how it wasn’t enough simply not to segregate; integration was required, too. Against this backdrop, and at some leisure in a long but not overlong book, the author examines the racial politics of leading political figures such as Barry Goldwater (“the philosophical abstraction of limited government held sway in his mind, and civil rights leaders, quite understandably, regarded Goldwater as an enemy”) and Lyndon Johnson, whose use of race in political calculus was not always effective. Gaillard provides an appreciative portrait of another McCain, namely John, and he takes sidelong looks at the music and cinema of the time, including one turning-point moment in which Dustin Hoffman, rather than Robert Redford, was given the lead in The Graduate: “the casting of the movie was a key to its successful blending of comedy, poignancy and social commentary.”

An illuminating, you-are-there view of events on the ground in the turbulent 1960s.