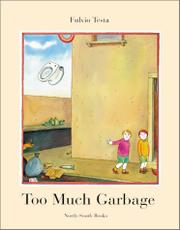 Hints of playfulness are squashed beneath the message in this trite consciousness-raiser. Two lads comment on the litter they see while wandering city streets: “ ‘People throw garbage out their windows,’ ” says one as a toilet comes crashing down, “ ‘They throw it out of cars. And someday the cars themselves will be garbage.’ ” The two stand, finally, contemplating a sea of garbage bags and castoffs—until one spots a flower amidst the trash. “ ‘We need less garbage and more flowers . . . It’s up to us.’ ” Testa’s crisp, simple style (A Long Trip To Z, 1997, etc.) is not well-suited to depicting litter; even the rusting hulks in his overstuffed junkscapes have a clean, tidy look, and trash is so neatly drawn that it hardly looks used. This may make a good discussion-starter, especially with younger children, but such calls to action as Christopher Cheng’s One Child (1999) or Loreen Leedy’s Great Trash Bash (1991) convey the problem, and possible responses to it, in more urgent, convincing ways. (Picture book. 5-7)