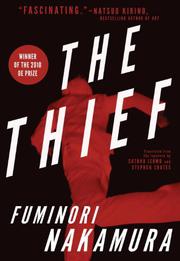 Nakamura’s first English translation takes a Tokyo pickpocket out way past his depth and makes him squirm.

Nishimura lives by his wits and other people’s money. He has eyes that can spot the wealthiest person in a crowd and fingers that can swipe a wallet without raising an eyebrow. As for nerves, he seems to thrive on the rush he gets every single time he breaks the law. All that changes when he lets Ishikawa, his former partner and mentor, rope him into a very different kind of criminal enterprise. Together with his sometime colleague Tachibana, they’re hired, or rather forced, by a big fish named Kizaki to accompany some of Kizaki’s regulars on a robbery. The job is routine, Kizaki blandly insists: All they have to do is tie up a rich man’s mistress and keep her quiet while the regulars force the man to give up the combination to his safe. Nishimura, who’s evidently led a sheltered life that hasn’t included the reading of much crime fiction, is amazed to learn that after he and his mates left the house, the regulars killed their victim, a prominent politician, igniting a string of consequences that won’t be over until Kizaki lures Nishimura into his net for another job. Nishimura never wonders how this second caper will turn out, and neither will most readers. A spare but otherwise routine two rounds of larceny and betrayal fleshed out by the narrator’s reflections on the Zen of picking pockets.