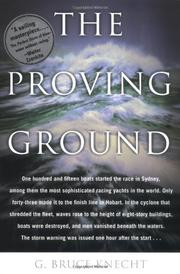 An account of the 1998 Sydney to Hobart Race debacle, this one focusing on three of the participants, from Wall Street Journal correspondent Knecht.

Anyone who sails across the Bass Strait from Sydney, Australia, to Hobart, Tasmania, will come up against some of the nastiest blue water on the globe. The annual race that has run this course for the last half-century is famously plagued by particularly cruel weather that comes in intervals of seven years—and 1998 lived up to its seventh-year billing by throwing the worst storm ever upon the contestants. Severe storm warnings were posted before and during the early hours of the event, but no one expected the 100-foot waves brought about by a handful of mad and convergent weather systems. Knecht concentrates the first half of his account on three of the participants (all of great wealth) who flew in the face of danger: Larry Ellison (founder of Oracle), Rob Kothe (a manufacturer of lifeline-throwing guns), and retailer Richard Winning. Although the author suggests that the men were variously “motivated by a kind of deeply rooted ambition that would never be satisfied,” possessed of an “abiding hunger for the kind of glory that winning the Hobart could bring,” or gnawed by a “sense that he was part of a generation that has never faced the kind of challenges that men should,” none of the reasons adequately explains why they would tempt such horrid fate (since the Bass Strait’s reputation was notorious). More commanding is Knecht’s handling of the storm-lashed hours at sea, as the crews of the three boats were pounded mercilessly—sailors were lost on both the Kothe and the Winning boats—while the heroic search-and-rescue squads pulled the lucky ones to safety.

While the disaster makes for some spellbinding reading, Knecht’s treatment of what prompted the sailors to take to the seas not only falls short, it falls prey to their macho swagger: “Such is love,” he quips of their mortally reckless behavior. (8 pp. b&w photos, not seen)