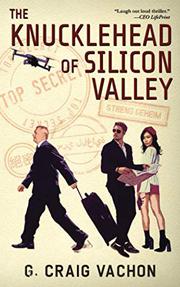 THE KNUCKLEHEAD OF SILICON VALLEY

A debut comic thriller tells the story of a tech developer forced to go up against his own inventions to save the world.

Hacker Ralph Gibsen has worked in Silicon Valley for decades, gaining experience across the industry by saying yes to every opportunity. Now in middle age, he works as an angel investor in altruistic companies: “Clam Pie made small investments in tech companies that tried to make the world a better place.” Unfortunately for Gibsen—who, in his personal life, is something of a hapless buffoon—he can’t always control who employs his technology or what they use it for. After he invents a tool that studies the human mind in order to pinpoint the exact moment a student learns something, he discovers that certain parties may be harnessing it to try to brainwash the public. What’s more, Gibsen may or may not have been acting as an unintentional spy. He’s forced to rely on some rivals, acquaintances, and strangers—who also may or may not be spies. (Even his own wife, Jen, might be one.) But can he trust them as he deals with the people coming after him? Can he even trust himself? Vachon’s prose is often dense with the jargon of technology and investment but manages to animate even these subjects with a pulpy energy: “After four hours on the third day, the Parties to the agreement finally declared themselves amenable to the deal. Ralph wasn’t happy with the final product, but neither were his new partners.” Gibsen is an oddly compelling protagonist: Not quite an Everyman, he nevertheless frequently finds himself in over his head. The author delivers a complex, meandering plot with frequent hops between years and continents and a wryly conspiratorial worldview that feels more akin to Thomas Pynchon than Tom Clancy. Vachon certainly takes satirical views of Silicon Valley, the global economy, and the intersection of technology and authoritarian control, but the novel never gets preachy and usually errs on the side of theatrics.

A rambling, intricate, and highly amusing tale of cyberpolitics and spycraft.