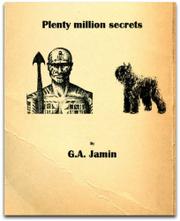 In Jamin’s thriller, a lost boy foresakes his past and embarks upon death-defying adventures around the world.

Jamin’s debut opens with a scenario familiar to the thriller genre: The young daughter of a wealthy businessman is kidnapped by a small, ruthless group led by a lean fighter wearing sunglasses and a ponytail. The kidnappers demand a ransom from the girl’s father but neglect to mention they’ve also accidentally abducted Carla’s friend Michael Dinero, a wiry, brilliant teen who manages to escape his captors before they deliver Carla to her parents. The girl is safe but traumatized, but there’s a problem: Michael left his backpack behind and his kidnappers know exactly where to find him and his parents, biotech millionaire Bob and tough, strident Gail. The Dineros hire ex–Secret Service agent Kevin “Boss” Daley to assemble an extremely well-paid team of experts to lower the profile of their opulent home and provide round-the-clock security. Boss and his team deal with threats both real and imagined, and the book seems poised to move toward a standard showdown with the villain. However, a quarter of the way in, everything shifts slightly toward the surreal; young Michael, in fear for his life and no longer willing to put his parents in danger, eludes his security team and disappears into the wilderness. Armed only with survival skills and calling himself Yorick, he spends months roughing it until the day he strikes up a conversation with eccentric millionaire Mr. Earle, who heads a shady international mercenary outfit called BlackBox Corporation. Earle’s bodyguard, Darwin, is an enigmatic figure who will become Queequeg to Yorick’s Ishmael. Impressed by Yorick’s computer skills, BlackBox hires him, sending him off on a series of far-flung international adventures that comprise the rest of the book. The text could use a thorough scrub to catch the kind of errors a computer’s spell-check would miss (“lightening” for “lightning” being one example). Despite those flaws, the important things—character development, dialogue, plotting and exuberant narrative flow—are all here in abundance.

A bizarre yet entertaining coming-of-age story.