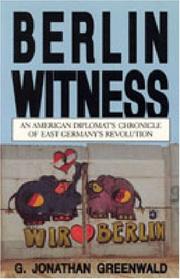 Interesting but unexciting diary of the fall of the Berlin Wall and East Germany, by Greenwald, who at the time was the political counselor to the US embassy in East Berlin. When, in 1987, Greenwald began his assignment, conventional wisdom had it—as put by German politician Egon Bahr—that ``all this talk of reunification is crazy nonsense...It is absolutely impossible for Gorbachev to give up East Germany.'' In this reconstructed diary, Greenwald doesn't pretend to have had any greater insight into future events—though, occasionally, he quotes prescient comments by others: The head of the East German Foreign Ministry's US section, for instance, who told Greenwald that ``in two or three years, we will have the same situation as in Poland and Hungary because we have exactly the same problems.'' Indeed, the events in East Germany were partly precipitated by events elsewhere in the Eastern Bloc. But as late as August 25, 1989 (less than three months before the Wall went down), Greenwald reflected that—with East Germany's disciplined Party, world-class security apparatus, and tolerable standard of living—it was difficult to envisage collapse. But when it became apparent that the East German government lacked the will to risk a crackdown, the situation unraveled with astonishing speed. Greenwald believes that it was the determination of the East Germans that proved decisive, though he adds that Kohl, by refusing to aid the East German government, made the downfall inevitable—as did the East German leadership, ``mostly old and sick men who had long since lost their ideals and sense of reality in the pursuit and protection of power.'' Intelligent insight into what was being said and thought at the time, at least in higher political circles, makes this a useful resource for historians; but Greenwald only occasionally brings to life the passion and turbulence of those last few days. (Illustrations)