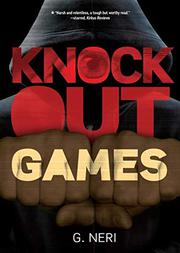 New girl Erica falls in with the wrong crowd in an exploration of racial tension in St. Louis.

In the wake of her parents’ separation, Erica finds herself in a new city and new school. After showing off her skills with the camera her estranged father gave as a parting gift, Erica wins the attention of a boxing club called the TKOs and the affection of their leader, Kalvin. The TKOs play the horrific “Knockout Game,” in which kids assault total strangers with a single punch for no reason other than the adrenaline rush. Erica is enamored by the TKOs and their worldview, but as things get real, Erica makes moves to get out. The results are thrilling. At every fork in the road, Erica makes the wrong decision, but surprisingly, this only makes her more endearing. The book’s second half, detailing Erica’s struggles to escape the TKOs and Kalvin’s tightening grip, is even stronger than the beginning; it’s where the author’s meaty ideas and exciting action sequences blend together perfectly. Kalvin may seem like every parent’s worst nightmare for their daughter, but the author draws him with a complexity that helps illustrate the larger themes being explored. Neri’s main concern is the “post-racial” urban landscape, raising many talking points while letting readers come to their own conclusions.

Harsh and relentless, a tough but worthy read.