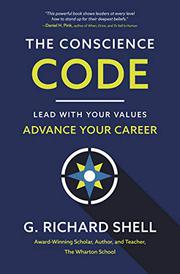 Lead With Your Values: Advance Your Career

A blueprint for ethical behavior in a frequently unethical business world.

Shell, the chair of the Wharton School’s legal studies and business ethics department, firmly asserts that adopting a “conscience code” of ethical behavior in a corporate setting is not only morally right, but also more profitable than the alternative. According to the Ethics Resource Center, Shell writes, 40% of U.S. workers have witnessed unethical behavior on the job over the course of a year, but most of it goes unreported out of fear or unaddressed due to inertia or incompetence. The author interviewed several Wharton students about their encounters with such bad behavior, and he presents a great many examples in these pages. Readers will find many of these situations familiar, whether it’s a manager coercing employees to overlook something illegal or an entire team overstepping boundaries to hit a deadline. He also draws on the work of social psychologists in identifying a select group of pressures that can lead to bad decisions, which he calls the “PAIRS Pressures”; they involve one’s peers, the desire to obey authority, incentives (such as goals and deadlines), role expectations, and systemic pressure. He then explains 10 rules that readers can use as guidelines to combat these pressures, such as “Face the Conflict,” “Commit to Your Values,” and so on. The aptness of Shell’s many examples and consistent tone of wise encouragement will doubtless help many struggling readers find the courage to live by their convictions in the workplace. They’ll be further encouraged by Shell’s insistence that doing the right thing is advantageous not only philosophically, but also practically. Indeed, the advice here is designed to reorient readers away from ambition and coercion—the lures of the so-called “bad wolf”—and toward the ethical path, which, Shell stresses, is the successful one in the long term: “Authentic, lasting success in any profession demands adherence to the highest standards of integrity.”

An inspiring business book about doing the right thing.