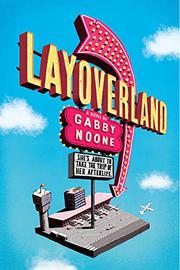 Coming-of-age can happen even when you’re dead and bitter.

Bea Fox dies in a car accident while crying about a fight with her sister (who is also her best friend), listening to a song she hates, and wearing jeans she doesn’t like. She wakes up in an airplane heading to Layoverland, an in-limbo place for heaven-bound souls with emotional baggage or secrets to clean up before they can depart for the Pearly Gates. Bitter, pessimistic, argumentative Bea is recruited into the Memory Experience Department and can’t move on until she helps a certain number of befuddled souls clear their minds (including a guy who is supercute—and responsible for her death. Awkward). And who knew that orange would be the go-to palette for the in-between afterlife? Bea is a terrific antihero, as if the naysaying comic relief in a teen movie got the spotlight instead of the pretty ingenue. But her acid tongue and eye rolls aren’t two-dimensional or one-note; layers to her pre-Layoverland life are interspersed to give depth. The fantasy and comedy make the narrative buoyant even while bullying, tragic deaths, class struggles, and reproductive rights are faced head-on. Bea and her family are white and working class, and the majority of the cast also seems to be white save for biracial (Mexican/white) love interest Caleb and brown-skinned Layoverland mentor Sadie.

A story about death that leans toward the light.