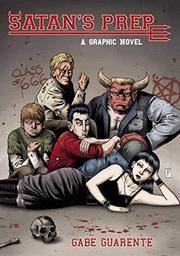 High school in Hell? Not so different from high school anywhere else.

Playing his premise for all it's worth, Guarente fills the halls of St. Lucifer’s Academy for the Hopeless and Damned with heavy-lidded teen dead and demons. There, the former serve as lab subjects in dissection class, are forced to watch sex-ed films featuring their own parents and otherwise endure like high-pain activities. For Trevor, the thick protective shells of ennui and self-loathing that he brought with him after being electrocuted by a crappy guitar amp begin to break down when slavering vice principal Cerberus promises a transfer to Purgatory if he can pull his “soul point average” up past 3.0 (it’s currently negative 2.8 billion). But then leaving starts to look less attractive when hot new goth student Persephone Plumm shows signs of interest. That interest leads to a clinch after Trevor crashes the school’s angst rally to play a “neo thrash core” ballad…but the course of true love is unlikely to run smooth, as Persephone has yet to share some significant information about her parentage. Being replete with disfigured students, terrifying monsters and scenes of gruesomely explicit torture, the art is as much fun as the broadly tweaked school-story tropes. (Said art is supplied by a rotating team, leading to some visual discontinuity from section to section.)