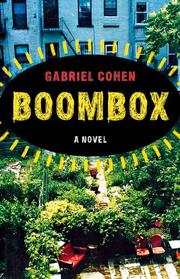 A beautifully written, thoroughly depressing novel about the racial divide.

Boerum Hill is a Brooklyn neighborhood in transition—gentrification having its dislocating, often painful way with the harried residents. Until recently uniformly black, it’s now mostly white, and while the neighborhood is outwardly peaceful, there is very little about it to suggest a community. True, Carol Fasone (white) and Grace Howard (black) do a bit of visiting back and forth, but it’s a cautious, circumspect relationship, flourishing far less than the gardens both are so good at growing. On Boerum Hill, everyone seems to stay at arms-length. And then young Jamel Wilson gets his new sound system: “four mighty speaker cabinets…SuperDJ 400-watt power amplifier.” A boombox to be reckoned with, a boombox to do justice to the gangsta rap that Jamel adores. Suddenly the white residents of Boerum Hill are plunged into “BPW (Black People’s World),” and they don’t like it. It alienates them. Perhaps—when the box is at full boom, which, to Jamel, is standard operating procedure—it secretly terrifies them. The one thing it does for certain is rally them. Organized, they go down to the local police station, where they encounter a surprisingly sympathetic African-American sergeant who recently endured a similar situation with his own neighbors—Russian music lovers. The sergeant is sympathetic but powerless. Jamel mutes the sound when the cops order him to, ratchets it back up the moment they’re gone. The conflict deepens. Both sides feel aggrieved.

Cohen’s first novel (Red Hook, 2001) was an exceptionally well-done police procedural. Readers may find this a mixed bag, however: a rich, inviting prose style coupled with a relentlessly gloomy worldview.