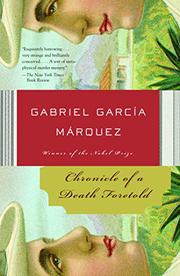 CHRONICLE OF A DEATH FORETOLD

In this new novella by the Nobel Prize-winner, a Colombian-village murder 20 years in the past is raked over, brooded upon, made into a parable: how an Arab living in the town was assassinated by the loutish twin Vicario brothers when their sister, a new bride, was rejected by her bridegroom—who discovered the girl's unchastity. Cast off, beaten, grilled, the girl eventually revealed the name of her corrupter—Santiago Nassar. And, though no one really believed her (Nassar was the least likely villain), the Arab was indeed killed: the drunken brothers broadcasted their intentions casually; they went so far as to sharpen their murder weapons—old pig-sticking knives—in the town market; and the town, universal witness to the intention, reacted with epic ambivalence—sure, at first, that such an injustice couldn't occur, yet also resigned to its inevitability. As in In Evil Hour (1979) and other works, then, what Garcia Marquez offers here is an orchestration of grim social realities—an awareness that seems vague at first, then coheres into a solid, pessimistic vision. But, while In Evil Hour threaded the message with wit, fanciful imagination, and storytelling flair (the traits which have made Garcia Marquez popular as well as honored), this new book seems crammed, airless, thinly diagrammatic. The theme of historical imperative comes across in a didactic, mechanistic fashion: "He never thought it legitimate," G-M says of one character, ironically, "that life should make use of so many coincidences forbidden literature, so there should be the untramelled fulfillment of a death so clearly foretold." (Also, the novella's structural lines are uncomfortably close to those of Robert Pinget's Libera Me Domine.) So, while the recent Nobel publicity will no doubt generate added interest, this is minor, lesser Garcia Marquez: characteristic themes illustrated without the often-characteristic charm and dazzle.