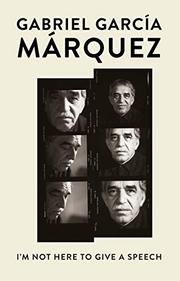 I'M NOT HERE TO GIVE A SPEECH

A set of speeches given over the course of his long literary career offers snapshots of the Colombian author’s uniquely eloquent humanitarian voice and vision.

García Márquez (1927-2014), the author of such classics as One Hundred Years of Solitude and Love in the Time of Cholera and winner of the 1982 Nobel Prize for Literature, was a passionate advocate for his Latin American culture and identity. In his Nobel speech, “The Solitude of Latin American,” he expresses his heartfelt hope that the Swedish Academy was ultimately recognizing through his work the underappreciated richness of the Latin American imagination, “because the greatest challenge for us has been the insufficiency of conventional devices to make our lives believable.” His idealistic vision of cultural rapprochement shines through many of these speeches, as he offers a plea for the convergence of sciences and arts (“for the questioning of both is the same over the same abyss”) and the significant role of the intellectual in society. Throughout his life, García Márquez was a fierce activist for social change. In “The Cataclysm of Damocles” (1986), he laments that in the nuclear age, the only reason we have not annihilated ourselves in a cosmic disaster is that “the preservation of human life on Earth continues to be cheaper than the nuclear plague. In “The Beloved Though Distant Homeland” (2003), delivered in Medellin, he rues Colombia’s devastating proliferation of narco-violence. Friendship forms the theme of two of the most affecting speeches, in which he celebrates the work of Álvaro Mutis (1993) and Julio Cortázar. Elsewhere, García Márquez reveals his deep roots in poetry and journalism. Regarding the latter, during a 1996 speech in Los Angeles, he presciently noted that the discipline was dangerously veering into a terrain of "innocent or deliberate mistakes, vicious manipulations, and venomous misrepresentations that give the news article the dimensions of a deadly weapon.”

Essential truths in the rare and generous voice of a maestro.