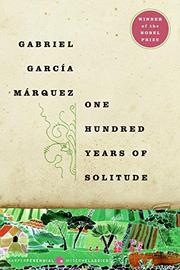 ONE HUNDRED YEARS OF SOLITUDE

Those (guessably not the general reader) who do not find the labyrinthine configurations of Señor Garcia-Marquez's mighty myth impregnable, and at times interminable, will be rewarded by this story of one hundred years and six generations in the peaceful, primal and ageless world of Macondo.

This is where his earlier No One Writes to the Colonel and Other Stories (1968) took place and it also features the same Buendia clan and its Colonel, a figure of dauntless energy and pride and stamina who carries on 32 small wars and fathers 17 sons by 17 wives. The Buendias are, for more direct purposes of identification, deliberately inseparable by name (and impulse—incest abounds) in spite of the helpful family tree frontispiece. At a rough count there are four Arcadios from the sire Jose Arcadio and six Aurelianos, including a pair of twins. Perhaps it does not matter since they all share to a degree the stubborn simplicity and outsized contours of comic folk characters. But if Senor Garcia-Marquez' book is fable, it is also satire with some of the fanciful giantism of earlier proponents (cf. the sections on war or government and the finally perceived "emptiness' of the former). For a time the Buendias remain untouched in their innocent world and are stunningly surprised by the artifacts of civilization which reach them—ice or false teeth. And even though they are afraid of a horrible precedent (a child born with a pig's tail) they pursue their closely inbred ways. But the incursions from elsewhere and above persist: there's the early plague of insomnia to the later four year, eleven month, two day rain. In the beginning so full of life, the Buendias give way to death and dispersion, and the last scenes of great-great-great-grandmother Ursula, living in the somnolent margins of memory, have great pathos. "Time passes. That's how it goes, but not so much" is a byword of the Buendias.

Those who pass time with the Señor will find this a luxuriant, splendid and spirited conception.