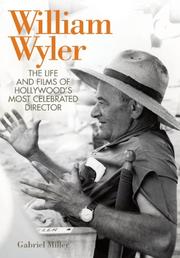 Wyler, writes film historian Miller (English/Rutgers Univ.; editor: William Wyler: Interviews, 2010, etc.), made numerous contributions to filmmaking, including the development of techniques of depth-of-field cinematography that are still studied and used today, to say nothing of crafting superb yarns in words and images. Yet, since his work dwindled in his later years and included some dogs (The Liberation of L.B. Jones) and puzzling near-dogs (The Collector), Wyler’s contributions, Miller suggests, may be undervalued. Wyler himself, writes the author, jokingly said that he was no auteur, “although I’m one of the few American directors who can pronounce the word correctly.” Yet he left a personal stamp on his films, and he even managed to sneak in a political message or two into films such as Ben-Hur in the face of repression at home, courtesy of the House Un-American Activities Committee and the blacklist. Wyler may be in eclipse today, but in his day, he was “considered a preeminent director by his peers,” including Billy Wilder, who thought that the opening scenes of The Best Years of Our Lives were “the most moving he had ever seen.” And Wyler made films that earned 38 Oscars and 127 nominations—no small achievement. Miller sometimes strikes overly academic notes (“The attitudes and ideologies that were taking root in the 1930s had their basis in the criticisms of American capitalism arising in the previous decade”), but for the moment, this is the best study of Wyler that we have.

A welcome addition to the literature of filmmaking.