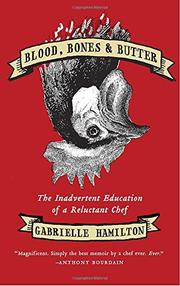 The Inadvertent Education of a Reluctant Chef

In this provocative debut, a renowned chef finds her fulfillment as a writer.

Though a passion for food provides Hamilton’s theme and focus, her passion for writing distinguishes this memoir from similar behind-the-kitchen volumes. In fact, her accomplishment as the owner and chef of Prune, in New York City, seems less like destiny than the result of a series of detours, from the broken family that left her to support herself with a series of food jobs since her early teens, when petty crime and casual drugs also marked her life, through her on-again/off-again college studies that culminated in an MFA in fiction writing from the University of Michigan. “I was not looking to open a restaurant,” she writes of the quixotic leap she made into the profession—despite never having worked as a chef, written a business plan or had any idea of the legal processes involved in converting an abandoned space into a tiny bistro that would quickly come to gross almost $2 million a year. While the centerpiece of the book is an amazing chapter that finds the foundation of Prune—its spirit of hospitality—in her experiences as an impoverished international vagabond, the restaurant provides only one dimension of the narrative’s richness. In a manner that is never glib or sentimental, Hamilton proceeds from the childhood innocence of her family’s unraveling through the life of a precocious hustler for whom introspection was a luxury through the romantic complications of leaving her longtime female lover for the Italian man she would marry. This union that would provide her with something like the family she had lost decades earlier, but a marriage that would prove both turbulent and unconventional (the couple had two children in their first seven years of marriage without living together).

After initially disdaining a career in food as one devoid of “meaning and purpose,” she finds both here.