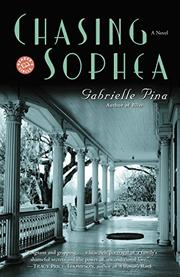 Dahlia has a secret, and so does Lucius, and Uncle Brother, and Aunt Baby, and the albino gravedigger.

Dahlia is a successful, beautiful, middle-class African-American woman living in California with a handsome husband and darling daughter. But when we meet her, her need to forget her traumatic past is about to drive her over the edge. A mysterious woman named Phoebe plots to steal Dahlia’s husband, daughter and house. Meanwhile, back in Dallas, her estranged father, Lucius, resists a nervous breakdown while running the funeral home that’s been in the family for three generations. Lucius’s young wife, Mercy Blue, bored with adding red dresses to her collection, is despondent and hysterical. Aunt Baby’s corns are throbbing—a sure sign of trouble—and Percival Tweed, the black albino gravedigger, is restless. What’s everybody so upset about? After 100 pages or so of repetitive set-up and hand-waving (Look! Big Family Trauma!), Pina finally begins to move her plot along, only to quickly halt it again with a series of “revelations” that only occasionally thrill or surprise in spite of their lurid content. The author’s habit of moving from viewpoint to viewpoint provides plenty of stories, but they don’t cohere into a larger one, and the characters don’t emerge as anything but quick, albeit colorful, sketches identified by their quirky habits or physical characteristics. This is particularly problematic with would-be protagonist Dahlia and is exacerbated by the nature of the plot, which requires her to disappear for long stretches. The prose is, on the whole, enjoyable, and thus many readers will overlook the clichés and lack of depth, but fans of Toni Morrison will quickly recognize this author’s inspiration and unfulfilled ambitions.