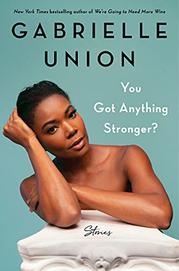 YOU GOT ANYTHING STRONGER?

The star actor and producer demonstrates her dedication to empowering young Black women and other marginalized people.

Union and her husband, former NBA superstar Dwyane Wade, are a Black American celebrity couple the media loves to follow. In the first and longest essay, “Loved Even as a Thought,” the author chronicles the couple’s pregnancy via surrogacy. Although Union first considered their decision to use a gestational carrier a “walk away from home plate,” the strategy paid off with the birth of Kaavia James. The Hollywood veteran is candid in her admission that, ultimately, she was a “character actress” in her daughter’s “one-woman show.” In the rest of the book, Union offers her takes on Hollywood parties, auditions, family dramas, and “how-to” advice for making it in “the industry” for aspiring young people of color. Regarding feedback, she writes, “Examine it and decide what you’re gonna take and what you’re gonna discard.” The author also writes charmingly and instructively about the many “bonding stepmother-stepdaughter moments” she has shared with her gender-nonconforming stepdaughter, and she shares an entertaining anecdote about inadvertently getting on Janet Jackson’s bad side—but don’t worry, Janet is now “the friend who reminds me to set my clocks back.” Union exposes gender problems in work life (“Balance is a lie” since the system “is rigged against women”) and rails against blackface and blackfishing, which entails non-Black people “stealing the looks and features of Blackness for profit.” While recounting the devastating rape she suffered when she was 19, the author describes how she found recovery and emotional support through watching Black Olympians triumph in the 1992 Summer Olympic. “I needed a lifeline,” she writes, “and what I saw was unapologetic Black stardom and perseverance.” Throughout, Black excellence is cast as the antidote to racism and other societal poisons.

As these essays ably show, Union is a dynamic role model for young Black women in all walks of life.