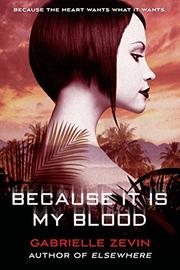 BECAUSE IT IS MY BLOOD

From the Birthright series

In this sequel to All These Things I’ve Done (2011), 17-year-old Anya Balanchine, heir apparent to the illegal chocolate trade in 2083 New York City, attempts to leave her criminal past behind with mixed results.

After doing time for shooting her cousin after his attempt on her ex-boyfriend Win’s life, Anya tries to distance herself from her deceased father’s black-market business. But when her fragile relationship with Win threatens the campaign of the incumbent district attorney, who also happens to be Win’s father, Anya finds herself fleeing the country to escape further imprisonment. She hides out on a Mexican cacao farm, where she discovers the roots of Balanchine Chocolate and gathers the strength to go back and face the remaining members of her treacherous family. After a sluggish start, the last third of the novel takes off when Anya is confronted with several surprising betrayals and confessions. Zevin’s stilted, formal dialogue and arid prose doesn’t do her hot-blooded mafia story any favors. Still, fans of the first will enjoy the author’s inventive combination of chocolate, crime and politics, as well as finding out Anya’s post-prison fate. Casual browsers should be warned that this is a true sequel that entails a read of the initial installment to make all the necessary connections.

Required reading if you own the first title.