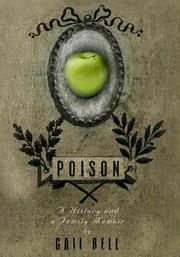 A History and a Family Memoir

An Australian pharmacist debuts with a lively, if disorganized, story of poisonous death in her family framed within an informal history of toxic substances.

In 1980, the author's great-aunt confirmed the family legend that Bell's grandfather had poisoned two of his sons in 1927. A doctor of naturopathy and an herbalist working around Sydney, William Macbeth allegedly killed his retarded four-year-old son because the boy was expensive to support and then forced his three-year-old son to drink a strychnine tonic as punishment for trespassing in his dispensary. Bell’s research reveals that Macbeth had learned pharmacology as a drugstore clerk but claimed an impressive and uncheckable pedigree including study in Pennsylvania. His bestselling product, labeled Macbeth's Strengthening Tonic (supposedly tested in the Highlands of Scotland on descendants of the great warriors of Culloden), contained a low dosage of strychnine. While gathering information on her crooked family tree, Bell offers a beginner’s course on fatal drugs: strychnine comes from the seeds of the Koochla tree and acts as a paralytic; arsenic is a tissue poison, causing the heart, liver, and kidneys to stop functioning. The author also ventures into famous historical and literary deaths. Cleopatra, who tested snakebites on servants, probably chose a cobra over an asp because the death is easier and the corpse better-looking. Emma Bovary and Napoleon died of arsenic poisoning, and Bell describes Emma's probable treatment if she had arrived in a modern ER. She considers George Orwell's 1946 essay “Decline of the English Murder,” which laments the end of poisoning’s golden era, dated by Orwell from 1850 to1925, before the advent of toxicological testing and the preservation of stomach contents. Bell relishes unusual cases like Anne McConkey's poisoning of her husband with wolfsbane in 1841 and a pharmacist/lover’s attempt to seduce a colleague with Spanish Fly, which killed her and another co-worker.