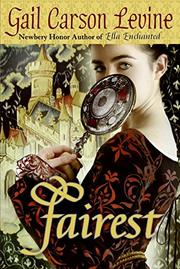 A musical maid with a love for gnomes discovers there’s more to life than being pretty. Abandoned at the Featherbed Inn in the kingdom of Ayortha, Aza was raised lovingly by the innkeeper and his wife. In Ayortha beauty and singing are prized above everything. Aza’s voice is the “finest,” but her “htun” hair and large physique mark her as ugly. She longs to be pretty. Fate takes Aza to Ontio Castle, where her voice charms everyone including Prince Ijori. Aza quickly becomes embroiled in castle intrigue when the king is injured and his scheming bride, Ivi, blackmails Aza into “illusing” her voice to make it seem that Ivi can sing. With Ayortha verging on rebellion, Aza realizes Ivi’s magical mirror will transform her into the fairest of all, but at a terrible price. Fans of Ella Enchanted (1997) will find Aza a kind-hearted, spirited heroine who uses her wit and voice to rescue the kingdom and who learns the hard way that beauty isn’t everything. A song-filled, fast-paced fairy tale. (Fantasy. 8-12)