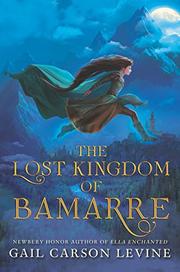 THE LOST KINGDOM OF BAMARRE

The rise and re-education of an unlikely champion by the author of Ella Enchanted.

Blunt and competitive, unpopular Peregrine seeks the approval of her adoptive parents, Lady Klausine and Lord Tove. Raised to believe in Lakti superiority and that the conquered Bamarre are “lucky to be ruled by us,” Peregrine discovers she was born a Bamarre. Reluctant to don the symbolic green tassel of servitude—the only visible difference between the otherwise racially indistinguishable two groups, members of which may be either “pale or dark”—15-year-old Peregrine proves her valor in battle but must flee Tove’s wrath. Relying on her surly maid (and birth sister), Annet, Peregrine seeks refuge with her peasant birth family yet finds she is equally ill-suited to being a cooperative, courteous Bamarre—except for her love of poetry. When the Lakti deem the Bamarre servants/serfs “beings” but not “people” and impose outrageous restrictions, Peregrine seeks freedom for the Bamarre, even if it means fighting monsters both magical…and human. Peregrine’s significant social shortcomings set her apart from the current plethora of martial heroines, and the requisite romance—with a love interest beset by various temporary physical impediments (deafness, blindness)—is wistful but not melodramatic. Levine riffs gently on “Rapunzel” and delivers an arch appraisal of discrimination and bigotry, cloaked in a magical, medieval, vaguely European fairy-tale setting.

A captivating and charming adventure sure to please young readers and longtime fans.