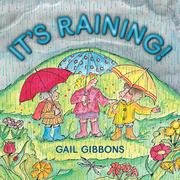 Though Gibbons includes lots of facts about rain in her latest, some flaws limit its usefulness.

The explanation of the water cycle, though basic, is solid and accessible for children: “As the water vapor moves higher into the sky, the air becomes cooler and cooler. Water vapor soon turns into millions of water droplets. This is called condensation.” Gibbons then goes on to describe the types of rain clouds. Unfortunately, her trademark watercolor-illustration style does not differentiate these enough, nor does the text, to make this knowledge applicable. She next tackles the different ways rain falls: drizzle, shower, rain, rainstorm, thunderstorm, flash flood. While the bit about thunder and lightning may soothe nerves about this typical childhood fear, introducing the threat of broken windows and falling tree limbs from other storms may offset this. The final few pages address storm cleanup, acid rain, cleaner energy sources and the possibility of a rainbow. How this latter forms is left to the backmatter, whose many facts should have been supplied in the text itself, including tips on staying dry and safe and a list of supplies to have on hand in case of a storm. As in her other titles, text within the illustrations gives further information and/or defines vocabulary words.

This effort gives partial information where children could have handled the full picture. Look to Julie Hannah and Joan Holub’s The Man Who Named the Clouds, illustrated by Paige Billin-Frye (2006), instead.