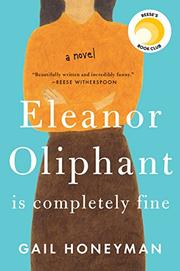 A very funny novel about the survivor of a childhood trauma.

At 29, Eleanor Oliphant has built an utterly solitary life that almost works. During the week, she toils in an office—don’t inquire further; in almost eight years no one has—and from Friday to Monday she makes the time go by with pizza and booze. Enlivening this spare existence is a constant inner monologue that is cranky, hilarious, deadpan, and irresistible. Eleanor Oliphant has something to say about everything. Riding the train, she comments on the automated announcements: “I wondered at whom these pearls of wisdom were aimed; some passing extraterrestrial, perhaps, or a yak herder from Ulan Bator who had trekked across the steppes, sailed the North Sea, and found himself on the Glasgow-Edinburgh service with literally no prior experience of mechanized transport to call upon.” Eleanor herself might as well be from Ulan Bator—she’s never had a manicure or a haircut, worn high heels, had anyone visit her apartment, or even had a friend. After a mysterious event in her childhood that left half her face badly scarred, she was raised in foster care, spent her college years in an abusive relationship, and is now, as the title states, perfectly fine. Her extreme social awkwardness has made her the butt of nasty jokes among her colleagues, which don’t seem to bother her much, though one notices she is stockpiling painkillers and becoming increasingly obsessed with an unrealistic crush on a local musician. Eleanor’s life begins to change when Raymond, a goofy guy from the IT department, takes her for a potential friend, not a freak of nature. As if he were luring a feral animal from its hiding place with a bit of cheese, he gradually brings Eleanor out of her shell. Then it turns out that shell was serving a purpose.