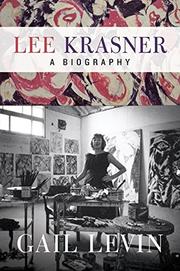 First biography of Lee Krasner (1908–1984), Jackson Pollock’s wife but also a significant artist in her own right.

Levin (Art History/Baruch Coll.; Edward Hopper: An Intimate Biography, 2007, etc.) links Krasner’s motivations and underlying themes to her Russian Jewish background, though Krasner rejected not only religion, but also nationalism and feminism. The author considered herself part of the Paris School, influenced by Matisse and Picasso, and she was a strong influence on the birth of Abstract Expressionism—even though historians often ignore her impact. Politics played a large role in her life, but she kept them separate from her art. Krasner worked for the WPA Federal Art Project through the 1930s until 1943, and though she called herself a leftist, she never became a communist, saving her from the butchery of the HUAC hearings during the ’50s. When Krasner met Pollock, she was the first to recognize his genius and made sure that he lived up to her expectation that he would make art history. Her art took a back seat to his career, but she never stopped painting. Though she essentially became known just as Pollock’s wife, she still promoted him, protected him, drove him and cosseted him. Krasner and Pollock were among the first to move to Long Island, where both writers and artists came together to form a colony that flourished for years. Living with Pollock was a full-time job, and it took many years before Krasner could finally throw off the comparisons of her work to his. The woman’s movement finally brought recognition, but she only wanted to be known as an artist.

Levin deftly connects Krasner’s biography to the social and political upheaval of the time. Her long experience in the art world gives insight into the landscape of 20th-century artists, art dealers and museums.