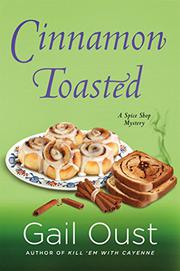 Piper Prescott (Kill ’Em With Cayenne, 2014, etc.) is finally getting her life back on track. Her shop, Spice It Up!, is drawing customers from Brandywine Creek’s crème de la crème, including Felicity Driscoll, owner of the prestigious Turner-Driscoll House, and mayor’s wife Dottie Hemmings. She’s started a relationship with the local veterinarian, and with Doug Winters at her side, she no longer dreads running into CJ, her ex, and his new squeeze, Amber, at high school football games. Even CJ’s mother, Melly, has mellowed enough to devise a point-of-sale software program for Piper’s spice shop—a program that Trustychipdesign.com is interested in marketing nationally. Melly is thrilled to meet with owners Chip Balboa and “Trusty” Rusty Tulley, only to have her hopes dashed when Chip’s body is found at the foot of her basement stairs the next day. Puzzled about how Chip could have met his fate in Melly’s basement without her knowledge, and maybe even her help, Chief of Police Wyatt McBride cordons off the whole house with crime scene tape, forcing Melly to move in with Piper. (After all, you could hardly expect CJ to take his mother into his multibedroom McMansion while Amber is renovating!) The two form a cautious bond that grows deeper as McBride zeroes in on Melly as his chief suspect. And in spite of her feelings for Doug, Piper can’t help squaring off repeatedly with McBride, who, to be fair, looks pretty good out of uniform.

Oust does the formula proud, adding a kick to this mystery/romance that’s so piquant it might have come straight out of Piper’s shop.