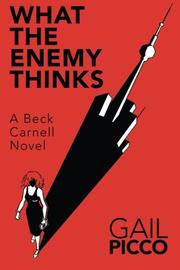 What the Enemy Thinks

Beck Carnell, a journalist-turned-CEO of media consultancy Social Good, becomes inspired by her agency’s latest media campaign, which involves carefully publicizing a dispute between the local Ontario Teachers’ Union and the Canadian government’s initiative to freeze wages and restrict the union from exercising its right to strike for three years. The intricate strategizing comes from several of Social Good’s best employees, including Yvonne Precipa, an overachieving media relations specialist, and Asmi, an Indian woman growing impatient with her husband Jai’s indifference toward revealing to his parents that they’d been married in secret. Another specialist, Todd Purcell, busies himself with an aggressive breast cancer campaign while facing political red tape and a precarious past. Adding to the mix is persnickety, rogue bookkeeper Tilda Grubbs, who has embezzled thousands and disappeared. Yvonne and Asmi’s storylines are introduced and resolved somewhat simplistically, whereas Beck’s character gets deeper development, particularly with remembrances of her childhood being regaled with her grandfather’s stories of Newfoundland, her high school days, and her impulsive marriage to former husband Anthony, whom she met while a college student. Beck struggles to provide emotional support for her two grown children while navigating their bitter animosity toward their father, and she aids best friend Samantha Reed, who’s learned of a devastating cancer diagnosis. While affable and devoid of the unsavory elements alluded to by the book’s title, Picco’s contemporary narrative suffers from a lack of plot as well as a surfeit of superfluous exposition. Such detail does little to heighten the narrative tension, particularly in a novel over 400 pages long. Nevertheless, the book’s resilient cast will generate compassion as its characters confront the social and political challenges facing teachers and charitable organizations.

Overdrawn yet readable portrait of collective advocacy and friendship at work, spearheaded by a valiant, relatable protagonist.