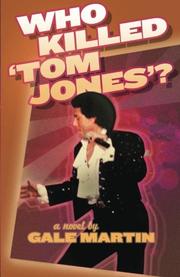 The life of a mousy rest home receptionist is upended when she attends a Tom Jones tribute artist festival and murder intervenes.

Ellie Overton is 28 and single since the current crop of soul-patched hipsters can’t hold a candle to the flamboyant macho man of her dreams, singer Tom Jones. When a Tom Jones Festival, featuring dozens of wannabes with varying degrees of talent, swings through her home town of Pankey, Pa. (along with sister city Hankey), Ellie decides to fork over some of her hard-earned pay as general dogsbody at the Finger Rest Home for a weekly pass. To her surprise, her childhood frenemy Happy Carlisle is there—married to Flip Henderson, one of the top contenders. The first night’s entertainment is cut short when the other top contender, Stan McCann, crashes through the stage steps and breaks a leg in the latest of a series of “accidents” plaguing tribute artist contests. Ellie returns the next night with a carload of rest home residents; Happy sets her up with an eliminated contestant, Evan Salter, but the date goes quickly south when Evan is found standing over Flip’s dead body with the murder weapon in his hand. Ellie’s life becomes increasingly complicated when her boss, Mr. Finger, holds her responsible for bringing his clients into a dangerous situation. She feels compelled to help Evan, who claims to be innocent, flee the police, while Happy latches onto Ellie to cater to her not-particularly-devastated widowhood. Happy’s dweebish brother, Donny, turns out to have matured into an eligible attorney with an unfortunate drinking problem, and sexy police detective Marc Levy does his darnedest to sweep Ellie off her feet. The rest home residents, Mrs. Peachey, Mrs. Hand and Mr. Harvey, along with handyman/driver Jorge, supply insight, support, comic relief and wardrobe advice. Martin (Grace Unexpected, 2012, etc.) has written an amusing cozy/romance, though the title is somewhat misleading: The Tom Jones tribute artist theme isn’t especially vital to the story; it could have taken place at any kind of venue with an element of competition. Murder takes a decided back seat to Ellie’s romantic quandaries, dividing her interest and loyalties among Evan, Donny and Marc, though, in fact, Ellie’s relationships with her elderly charges are the real heart of the story.

While the title seems pitched to Tom Jones fans, this mystery will appeal more to fans of lighthearted romantic cozies with fairly conservative social views.