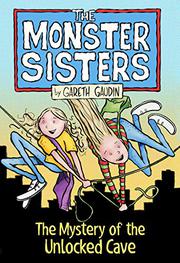 THE MONSTER SISTERS AND THE MYSTERY OF THE UNLOCKED CAVE

Two sisters try to solve the mystery behind monster attacks on their Canadian home.

In this graphic offering, siblings Enid Jupiter and Lyra Gotham’s beloved city of Victoria is plagued by such destructive creatures as a hairy squid, a giant yellow reptile, and mysterious Mirror Masons. Aided by a cache of clever mystery-solving tools, the girls swing around Vancouver Island on magical vines and find clues alongside interesting historical facts, as when Enid and Lyra see Gyro Park’s large statues roar to life while readers learn about the actual landmarks. This middle-grade graphic novel has expressive and bright illustrations, housed in large and tidy panels laid out with easy-to-read text bubbles. Gaudin offers what should be a fascinating mix of intriguing elements: imaginative monster battles, fun historical facts, a gently spooky mystery, and a warm emphasis on sisterhood. Unfortunately, it has an overall scattershot feel. The girls’ investigations lack clear endpoints, with one monster mystery tenuously dissolving into the next without any definitive resolution. Enid and Lyra both present white; there are few other human characters in their adventures, although the ones they encounter are exclusively white. While a nod is given to using the Indigenous names of British Columbia’s landmarks, no visual representations of these peoples are shown.

A quirky mystery that does not quite hit its mark.