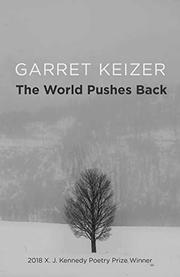 THE WORLD PUSHES BACK

A new collection of poetry from an award-winning author of prose.

Keizer (Getting Schooled, 2014, etc.), a Guggenheim Fellow for general nonfiction, contributing editor for Harper’s, and the author of eight previous books, is best known as an accomplished prose stylist. However, during his decadeslong career, he’s also released a modest number of poems, some of which have appeared in such venues as the New Yorker, AGNI, and the Harvard Review. He collects many of them here in his first stand-alone volume of verse. Because the works cover a 40-year span, there’s no clear throughline, but the fact that they read as miscellany is no defect. Rather, it allows readers to observe a skilled writer and deep thinker as he roves far and wide with his insights. The passage of time is a recurring concern; in “Now and Then,” for example, he thinks back to the days before the oppressive white noise of electricity: “How quiet they must have been, / the days before power / became so literally a household word. / I think that sounds were sharper / against that stillness, / bird songs and piano chords, / the voice that called your name.” In this piece, Keizer renders the author’s purest dream; after all, what writer doesn’t hope that his words might ring out more piercingly? Later, in “My Daughter’s Singing,” he looks forward to a moment when his child will have moved out of the family home: “already I am talking— / a year to go before she goes / to college, and listen to me talking— / in the past tense as she sings.” It’s a poignant testament to a father’s love, couched in a deft exploration of the future anterior. In “My Daughter’s Singing,” time’s flow is lamentable, but it’s also given readers this fine accretion of years of work. As Keizer writes, “Eventually you find the rhyme / for every word.” Here, he has, and readers will be grateful.