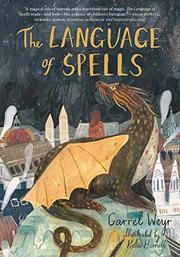 THE LANGUAGE OF SPELLS

Set primarily in Vienna, this middle-grade novel explores themes of honor and courage as it tells the story of a friendship between a young girl and a dragon.

Grisha, a dragon, was born in the Black Forest in 1803, a time when magic was still commonplace. When a powerful sorcerer’s enchantment turns Grisha into a teapot, he can still see and hear, but he cannot move or speak. After many decades, which include the two human world wars, Grisha is freed and travels to Vienna, where he has heard that dragons are congregating—but soon after he arrives, many of the dragons mysteriously disappear. He meets 11-year-old Maggie, who lives in Vienna’s Sacher Hotel with her poet father. Grisha is pleased and gratified that Maggie can see him since, by now, humans have become so busy and preoccupied that they no longer see what they don’t wish to see, which includes dragons and magic in general—one of many equally graceful observations that amplify this delicate, original story into something much more than its plot. The two become friends and determine to find the missing dragons. Weyr’s deft, assured narrative is interwoven with dry humor and percipient observations as it explores the value of seeing magic in one’s life as well as the honor of sacrifice. Harnett’s evocative black-and-white illustrations add atmospheric richness, depicting its human cast as white Europeans.