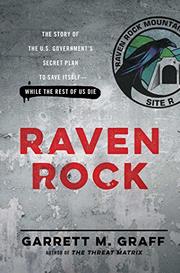 The Story of the U.S. Government's Secret Plan to Save Itself—While the Rest of Us Die

When the missiles start raining down, don’t look for your senator. As this spry but sobering book reveals, government officials will already be tucked away underground, ready to legislate in the ashes.

Dwight Eisenhower had it right: in the event of nuclear war, the president counseled, “you might as well go out and shoot everyone you see and then shoot yourself.” Alas, that requires a resolve that our Congress may not possess. In any event, from the moment World War II ended, the government has busily made all kinds of contingency plans to ensure its continuity. One locus, as Graff (The Threat Matrix: The FBI at War in the Age of Terror, 2011, etc.) writes, is the Raven Rock of his title, an underground city that will serve as an alternate Pentagon in the case the original is destroyed. Other centers dot the mountainous country of Virginia, West Virginia, Pennsylvania, and Maryland, close to the major centers of commerce and government but tucked deep into granite and limestone. The desired continuity, as Graff notes, may be “of an idea larger than any single officeholder,” but of course officeholders have long lobbied for a place in the fortress just in case. By looking into just one dark corner of it, the author does a good job of showing the growth of the security state at large, none of which will make sensitive persons sleep any easier, especially with the nuclear clock now ticking so close to midnight. One particularly unsettling discovery is that the more money and power an agency has, the vaguer its purposes, as when the Office of Censorship changed its name to the Wartime Information Security Program and became nebulous in the bargain. Another is…well, just be glad that Richard Nixon never gave the order to launch.

Fans of Kiefer Sutherland, to say nothing of the X-Files and Terry Southern, will already know some of what Graff reveals here. For the rest, it’s a frightening eye-opener.