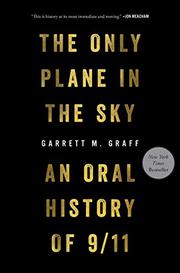 THE ONLY PLANE IN THE SKY

Wrenching, highly personal accounts of 9/11 and its aftermath.

Former POLITICO and Washingtonian editor Graff (Raven Rock: The Story of the U.S. Government's Secret Plan To Save Itself—While the Rest of Us Die, 2017, etc.) returns with an impressive feat of organization, editing, and balance. He begins the story early in the morning of 9/11, proceeds through the entire day, and then follows up with comments from people about the ensuing weeks, months, and years. He spent three years collecting stories from a wide variety of people—survivors, responders, politicians, witnesses, family members—and then assembled the pieces into a coherent and powerful re-creation of the attacks on the twin towers, the Pentagon, and (perhaps) the Capitol, an attack that failed when the passengers aboard Flight 93 fought back, their plane crashing in a Pennsylvania field. Some of the storytellers’ names are well known—e.g., Katie Couric, Dick Cheney, Condoleezza Rice, Laura Bush—but most of them are not. Graff also does an admirable job of maintaining focus on the personal stories and does not drift off into political commentary—or engage in placing blame—or arrange the material so that some of his interviewees look good and some bad. Pretty much everyone emerges looking good, from President George W. Bush on down the political ladder—not to mention the stunning heroism of the fire and police departments and the unnumbered, and sometimes nameless, others who rushed to help. Graff excels at re-creating the anxiety and terror of that day: What is happening? What’s next? Who did this? Most affecting of all, of course, are the accounts of those who survived, the responders who struggled to help (and who lost so many of their colleagues), and the families who learned a loved one would never be coming home. Pair this with Mitchell Zuckoff’s Fall and Rise (2019) for a full, well-rounded perspective on this monumental tragedy.

Readers who emerge dry-eyed from the text should check their pulses: Something is wrong with their hearts.