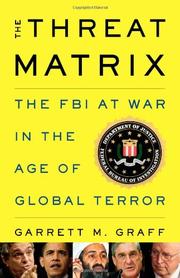 The FBI at War in the Age of Terror

Action-filled, richly detailed portrait of the Federal Bureau of Investigation in its new guise—charged not just with solving crimes already committed, but now with preventing at least some of them.

When the music piped in to the FBI’s Visitor Center in Washington, D.C., includes cuts by John Lennon, you know that these aren’t your grandpa’s G-men. By Washingtonian editor-in-chief Graff’s (The First Campaign: Globalization, the Web, and the Race for the White House, 2007) account, almost everything we know about the FBI is frozen in time, locked in anachronistic images of J. Edgar Hoover and Eliot Ness. Today, under the direction of Robert Mueller, the FBI enjoys as much influence as it did in the days of Hoover: The president sees an FBI agent and an FBI “threat matrix” report every day, the latter “a printed spreadsheet of all the various terrorist plots and worrisome intelligence the government was currently tracking.” Hundreds of FBI agents now travel the globe in search of enemies and criminals, stationed in some 60 countries; as Graff notes, the agency once “even worked a computer-hacking case in Antarctica.” The nearly 14,000 agents are a very special kind of law-enforcement officer indeed—nearly half have a graduate degree, many are lawyers or accountants and Mueller himself specialized in litigating complex white-collar crimes before heading the agency. There is good reason for this specialization, for if the FBI has transformed itself into a prosecutorial rather than primarily investigative force, in response to George W. Bush’s demand that “the Bureau adopt a wartime mentality,” it is to fight crime at the level of terrorist cell and secret bank accounts. Graff highlights the agency’s work in the post-9/11 world, cogently examining the role of intelligence in international affairs while making a quiet case for us to think a little better of the G-men and women. The CIA is another matter... There’s solid storytelling at work here—and quite a story to tell, too.