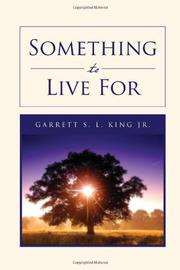 SOMETHING TO LIVE FOR

A debut multigenre collection of short pieces presents vignettes focusing on the lives of African Americans from a variety of perspectives, both real and fanciful.

This eclectic anthology begins with an autobiographical sketch, “P Is for Pride and Perseverance,” in which King traces his early years from his 1979 birth to a 16-year-old mother to his incarceration for attempted robbery and his subsequent determination to do something positive with his life. “Baby Girl” reprises the story of King’s birth from his mother’s point of view, a girl whose teen pregnancy seems predestined by both her grandmother’s clairvoyant dreams and her own limited expectations. Other narratives are linked by shared characters, such as “Posse Up, Ladies First!” and “Thug Angel,” which provide somewhat idealized portraits of street gangs as building blocks of the black community. “Battle Kats” is an SF work about a group of humanoid felines from another planet who work undercover to defend Earth and its alien allies. The central section of the book is occupied by a collection of 21 poems. Some, like “Hold on to Love” and “Away From Home,” focus on romance while others, such as “The Rent Is Too Damn High!” and “Blockstars,” illuminate the experiences of working-class African Americans in inner-city neighborhoods. “Remember Me?” calls up the spirit of LaTasha Harlins, a young black woman shot by a Los Angeles shop owner in the early ’90s, speculating “I wonder what you could have been LaTasha?” King’s efforts to describe his personal struggles and the vibrant characters who populate impoverished black communities are ambitious and dynamic. His prose narratives are too short to feel really complete, but they deliver glimpses into a world mainly familiar to the urban poor, where drug dealing is one of the few available career choices, incarceration is a rite of passage, and street gangs view themselves as community leaders. While the author does have a tendency to romanticize life on the street, as in “Posse Up,” in which a girl gang maintains a strict “code of principles,” his writing presents a vision of what could happen if people worked to “play a part in the improvement of the community.”

A volume of poetry and prose that offers heroic visions of urban African Americans.