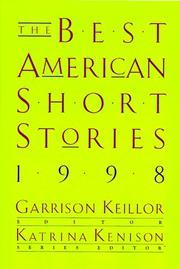 Radio host Keillor (Wobegon Boy, 1997, etc.) takes a station break and puts together this year’s Best American collection. Most of the entries, it must be said, are a long way from “above average.” The withering of the few mainstream journals still interested in fiction was a process underway long before Tina Brown stepped off the Concorde, but its effect is still being felt: the majority of pieces here have the sketchy, tentative feel of outlines, first drafts, or’sadder still—mere scribblings rather than fully crafted narratives. Many are simple recollection pieces, like John Updike’s elegiac, unsatisfying “My Father on the Verge” (a young man growing up in small-town Pennsylvania in the 1930s) or Poe Ballantine’s even flatter “The Blue Devils of River Avenue” (a shy suburban boy’s encounter with the disreputable family down the block). The “slice-of-life” genre is beginning to seem more and more like a sitcom in which nothing happens, although Carol Anshaw’s “Elvis Has Left the Building,” about the daily travails of a couple of lesbian friends, manages at least to wrap up several uninteresting characters in a modicum of wit. The more ambitious stories nearly all disappoint: Doran Larson’s “Morphine” offers an undergraduate rendition of Molly Bloom’s soliloquy, while Diane Schoemperlen’s “Body Language” (on the less-than-blissful marriage of “he” and “she” from an anatomical perspective) is only slightly less pretentious. Among such company, more ordinary narratives like Tim Gatreaux’s “Wedding With Children” (an old man attempts to provide some moral direction to his fatherless grandchildren) or Akhil Sharma’s “Cosmopolitan” (an Indian immigrant has an unhappy love affair with an older American woman) come as something of a relief, if not much of a pleasure. For the trade only, as they say: a coffeetable book that few will want to crack.