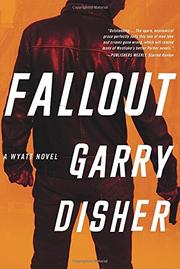 Peerless Aussie thief Wyatt teams up with his not-so-peerless nephew Ray for a high-stakes caper that’s got failure written all over it.

Despite the different outfits he wears for each job, the Victoria Police know that the same man is responsible for all the shotgun-fueled bank jobs they’ve been investigating. What they don’t know is that the bush bandit is Raymond Wyatt, the estranged nephew of the crook who’s been a thorn in the constabulary’s side for a dog’s years. Not content to stay with a life of honest stickups, Ray’s been smooth-talked by gambler Brian Vallance and his much younger girlfriend, Allie Roder, into going shares on an independent, illegal salvage operation that promises to net the partners millions. Ray plans to raise the money he needs to buy in by pulling an art heist on commission from a crooked lawyer, and since he needs a partner, he naturally thinks of his uncle, who’s capped his latest jewel robbery (Port Vila Blues, 2012) by drugging Sgt. Liz Redding, the cop who chased him all the way to his bedroom, and running out on her. But before the two Wyatts go after those lightly guarded paintings, Ray unwisely accepts another offer of £15,000 to break murderous holdup man Tony Steer out of jail. He plans to keep this little commission secret from his uncle, but an explosion of violence brings it to Wyatt’s attention anyway. Nor does the theft of those paintings come off quite as Ray expects.

There’s a little too much of the younger Wyatt, who’s nowhere near as compelling as his uncle, but Disher continues to show an impressive knack for planning capers that go like clockwork but then come to grief anyway.