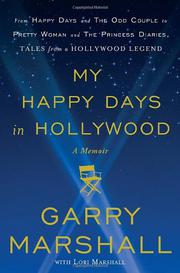 MY HAPPY DAYS IN HOLLYWOOD

Happy days are here again, in the autobiography of a director who “always wanted to be remembered as the Norman Rockwell of television.”

As the producer, writer and/or director of Happy Days, The Odd Couple and Laverne & Shirley on TV, and the director of hit movies including Pretty Woman, Runaway Bride and The Princess Diaries, Marshall seems like a nice guy for a man who has enjoyed such Hollywood success, and a loving family man (married once, now with six grandchildren) within an industry not generally known for such stability. Unfortunately, for a writer whose previous book was titled Wake Me When It’s Funny: How to Break Into Show Business and Stay There (1995) and who got his start writing jokes for comedians, he isn’t very funny. Or at least this book isn’t. Nor is it serious, mean, scandalous or particularly revelatory. It’s just nice. Marshall has gotten along fine with some difficult actors—including his sister, Penny, and the beleaguered Lindsay Lohan—and has apparently remained friends with everyone with whom he has ever worked. He rarely asserts his ego and occasionally takes less credit than he might be due. He knows that Julia Roberts did more for him than he did for her; he writes of Pretty Woman, “If a movie can change a man’s life, this would be that movie for me.” Marshall also knows that such hits couldn’t inoculate him against a series of stiffs, and he gives nearly every project (long-forgotten movies as well as recent bombs such as New Year’s Eve) equal space in its own chapter. His philosophy might best be expressed in his remarks on the generally dismissed Raising Helen: “It was never going to be the kind of picture that made big money or took home prizes, but it would turn out to make audiences smile, and I like making audiences smile.”

Marshall writes that he combats stress with an “ice-cream sandwich or a Fudgsicle.” This is a Fudgsicle of a showbiz memoir.