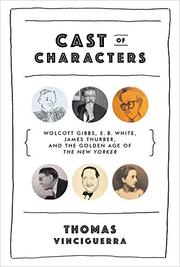 A fresh view of the much-chronicled magazine, focused on the three writers/editors who, with founder Harold Ross, shaped its sophisticated stance in the years between the world wars.

“Elegant arrogance” is how The Week magazine founding editor Vinciguerra (editor: Backward Ran the Sentences: The Best of Wolcott Gibbs from The New Yorker, 2011, etc.) aptly describes the magazine’s rigorous distaste for what editor-in-chief Ross called “bunk.” Yet the author follows his generally positive assessment of Ross and company’s merciless skewering of sloppy writing and thinking with a quote from humorist Frank Sullivan warning that this was “the attitude of a couple of callow sub-editors from the Harvard Lampoon.” This book is admiring without airbrushing the magazine’s limitations and eccentricities. Wolcott Gibbs, feared drama critic and peerless parodist, was a depressive misanthrope who seemed rarely to have a happy moment. James Thurber, whose editing gave “Talk of the Town” its crisp, smart tone, was a misogynist far nastier than his cartoons chronicling the war between the sexes. E.B. White, who dominated the “Comment” section with his urbane yet down-to-earth pieces, was the least neurotic (and least alcoholic) of the triumvirate, but he was devoted to Gibbs and Thurber and vice versa. With the micromanaging Ross looking over their shoulders, they gave the magazine its voice and its panache, nicely conveyed by Vinciguerra in judicious excerpts from emblematic articles and juicy anecdotes involving many talented, turbulent contributors. The advent of World War II began to transform the New Yorker into a less lighthearted periodical, more consistently devoted to serious long-form journalism. Ross’ death in 1950, its 25th anniversary year, marked the end of an era; by the time of Gibbs’ demise in 1958 from a combination of booze and pills, he, Thurber, and White were making only occasional appearances in the magazine. It would thrive under William Shawn but as a very different animal.

THE 40s
by The New Yorker
Nonfiction

ABOUT TOWN
by Ben Yagoda
Nonfiction

THE 50s
by The New Yorker
Nonfiction

THE 60S
by The New Yorker
Nonfiction