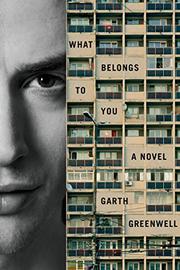 WHAT BELONGS TO YOU

The life of an American expat living in Bulgaria intersects repeatedly with that of a young gay hustler in this gorgeous debut novel from Greenwell.

The unnamed narrator—an English teacher who lives in the city of Sofia—has an addiction, and that addiction’s name is Mitko. After they meet for the first time in a public bathroom, Mitko flits in and out of the narrator's life with abandon, alternating among offers of sex, hints at love, threats, blackmail, hunger, illness, neediness, rage, and despair. Mitko is beautiful, self-assured, and an enigma, and the narrator finds it hard to resist him. His growth is in his responses, which range from acquiescence to refusal, and it is this engine that propels the reader forward through a series of tenuously connected chapters that advance in irregular chronological intervals. This is a novel with a short story sensibility; many of the chapters stand on their own, hanging together only in the loosest sense. This is a feature, not a bug: instead of aggressively pursuing a series of tightly woven plotlines, readers may have the sense that they're peering through the narrator’s window randomly and of their own free will, observing his latest state each time. As for the narrator, he can only move forward if he interrogates his past—the question is, will he be able to? The prose here is supple and responsive, and Sofia teems with beauty and decay. Mitko lights up scenes like a firecracker and haunts the ones where he’s absent—a large segment of the novel where he does not appear still vibrates with his energy—but the protagonist too is a source of gentle, steady illumination as he grapples with his cravings, memories, fears, and grief. This is a project of rare discernment and beauty, and it is not to be missed.

A luminous, searing exploration of desire, alienation, and the powerful tattoo of the past.