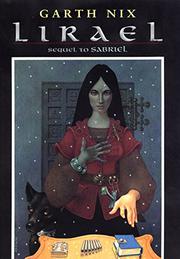 Daughter of the Clayr

In a riveting sequel to his acclaimed Sabriel (not reviewed), Nix recreates his trademark mélange of horror and fantasy. For the 18 years that King Touchstone and Queen Sabriel have battled necromancers and their Dead minions, orphaned Lirael has grown up among the Clayr sisterhood. Bereft of their prophetic Sight, she finds consolation in their labyrinthine library, honing her magecraft amid its ancient tomes and artifacts, and solace in the company of the Disreputable Dog of ambiguous magical provenance. Meanwhile, Prince Sameth has left school, shamed by his less-than-regal character, and terrified of inheriting Sabriel’s duties opposing the Dead. But when a long-buried evil begins stirring up necromantic menaces and meddling in inter-kingdom politics, Lirael and Sam are forced to abandon their fears and dreams in order to shoulder burdens they could never imagine. This is pure-quill epic fantasy, with satisfyingly intricate world building that still propels the plot. Nix subtly invests minor characters, objects, even the landscape with vivid life, and his villains are acidulous distillates of pure malevolence. Lirael and Sameth possess rich personalities, sufficient to sustain the complex parallel narrative in which they do not meet until near the conclusion; in a refreshing departure from gender stereotypes, Lirael is mature, restrained, and analytical, while Sam is passionate, impulsive, and creative. The sarcastic feline familiar, Mogget, and the engagingly enigmatic Disreputable Dog add charm and sly humor to a tale that would otherwise be desperately grim. Readers who like their fantasy intense in action, magisterial in scope, and apocalyptic in consequences will revel in every word, especially the last three: “To be continued.” (Fiction. YA)